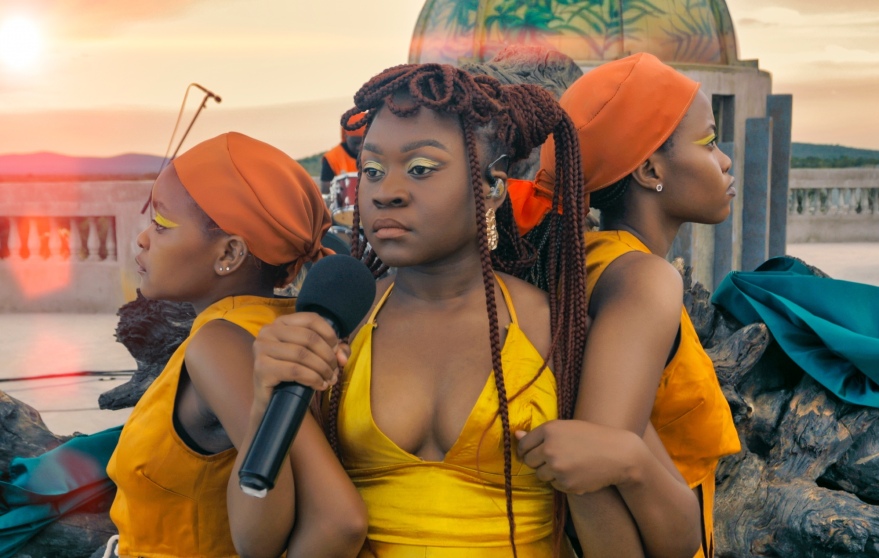 Amongst friends, I’ve come to understand varying perspectives on Hip-Hop are ever-shifting based on the culture. Thus, the way I think Black Thought, Little Simz, or Rapsody are some of the hottest MCs, they’ll prefer to hype up the know–gritty Hip-Hop keen on bars, arrogance, moody drug rap, like Pusha T, Benny the Butcher, and A$AP Rocky. It’s perplexing as Hip-Hop’s growth has been more than just blending sonic influences from regional hip-hop in the US and UK. And it’s because of that growth we’ve been able to see artists embrace genres beyond the immediate know–like Jazz, soul, and R&B–these artists have been able to blend House and Hip-Hop, Regional African Music, past massive pop hits like Right Said Fred’s “I’m Too Sexy,” etc. Sampa the Great reflects this growth, offering a shift from past tracks, blending some minimalism with exuberant production. Sampa doesn’t mince words; she has these creative flows and unique rhythmic patterns that help push themes to the forefront. It’s as effervescent as ever on her follow-up to The Return, As Above, So Below.

As Above, So Below goes beyond to allow inflections of Sampa the Great’s verses to get heard. She’s always been one to express her Zambian heritage musically through features, production, and the incorporation of its languages to boast her identity as a rapper. Though we’ve gotten projects that demonstrated her masterful technical skills, it was only a matter of time: an expansion on the production’s use of African sounds to coat the core hip-hop percussion notes with the evolution of construction. Because of it, it’s focused on central thematic cores, allowing for simplistic themes about perseverance and individuality, like in “The Great Never Forget.” Featuring Zambian musicians Tio Nason, Chef 187, and Mwanje, they bring varying languages of the region, like Bantu and Bemba. It adds depth toward seeing Sampa’s vision, as her roots extend beyond the recent. Incorporating contemporary features boast Sampa’s talent, parallel to rappers like Denzel Curry, Joey Bada$$, and Kojey Radical. Woven in between tracks that hone in on her Zambian roots, which get reflected through language and sound, like the remarkable “Can I Live?” featuring Zambian Rock group Witch or Angélique Kidjo on the closing track.

Now, you might think: “It may be an extra step to translate,”, especially for some, but it’s worth that time as it opens the doors to Sampa’s world. Though we get varying sonic styles and features, Sampa’s Hip-Hop is at her core. She doesn’t forget that it’s a part of her, further shifting styles to embolden her MC-like skills. It’s a continuance of what we got loosely on The Return, seeing Sampa work with artists of varying regions, like South African rapper Ecca Vandal and South Sudanese-Australian Rapper Krown. We won’t hear a constant reverence toward non-sequitur Hip-Hop that matches the grooves and tones of an expected, instead reflecting the flows/rhythmic patterns of the performing artists like on “Lane” with Denzel Curry. Sampa has proven herself with past tracks like “Final Form” and “Freedom,” but when it comes to As Above, So Below, it tries to ground itself with a message before allowing herself to get lost in the metaphors and wordplay. Unfortunately, we hear her get lost delivering choruses and bridges, and at times, minimalist bars loosely, like the lines “Who took fabric, made that shit classic/That shit ain’t average/We did,” on “Never Forget,” or the weak refrain on “Bona.”

But I know Sampa the Great has bars equipped and ready, but what’s important to her is trying to convey a message that speaks identity more than reflecting on the stasis of her career and the future. Though we get some moments of that here, it reflects on her artistry instead of being about how her kind of style has made her successful enough where she exclusively flexes her riches. Her natural confidence only energizes the effectiveness of the themes getting relayed by both sides–blending different artists that shift our understanding of international artists. So when I searched the translation of Chef 187’s verse on “The Great Never Forget,” it dawned on me that understanding it in my native tongue isn’t like understanding how the inflections, flows, and phrasing from bar to bar for those who consume it regularly. It’s similarly the case with features that buoy over the strength of the production, like in the closing track “Let Me Be Great,” featuring Beninese Singer/Songwriter Angélique Kidjo. The feeling is musically joyous, specifically when looking at her clear direction and what she achieves. It’s an experience that elevates everything around it, from its colorful and expansive production to transitional consistency upping the volume of the performances.

As Above, So Below is a triumphant follow-up to The Return. It tells us who Sampa the Great is without taking away from what makes her a fantastic artist: her lyrical and technical skills, seemingly camouflaging within the beat and creating works of art that transcend past the core hip-hop-sphere. It left me hungry for more, despite a tightknit 40 minutes that feels hefty in its thematic depth. I’ll be returning to this frequently, and hopefully, what I heard gets captured similarly with you, the listener.