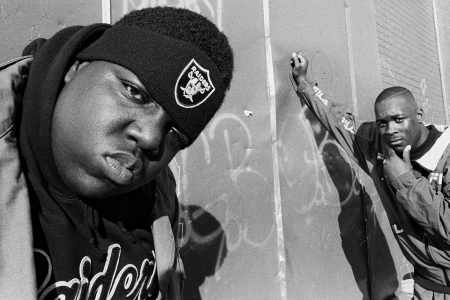 Biggie: I Got A Story To Tell is a slightly unconventional documentary that morphs it style into an intimate retelling from various people, including Christopher “B.I.G.” Wallace through home movies. It is slightly reminiscent of Tupac Resurrection with the home movies acting as a narrative device, but it takes a different turn by adding introspective and intimate interviews with family and friends. The documentary focuses on the varying degrees of influence – sociologically and more – toward the kind of music Christopher “B.I.G.” Wallace made and how it defined him as a person as well. Biggie: I Got A Story To Tell shows clear authenticity, parallel to the myth we’ve come to know about his artistry. Through home movies and intimate interviews, we are given a bigger scope of the rapper and the music and life that influenced him to become the artist we’ve come to know him as.

This film has a story to tell and it accomplishes its goal, since it redefines the legend in an authentic light and not within some hierarchy of myths within the rap world. It destroys the duality once perceived and the character shown, and importantly how much of a kid he was and the exponential growth as an artist and adult. Unfortunately we only got to hear part of that maturity (musically) in his follow-up to Ready To Die, Life After Death, but this film gives you enough info to go listen to both albums and hear for yourself – sans the R-Kelly feature.

I Got A Story To Tell use of home videos from D-Roc, one of B.I.G.’s longest friends to create the narrative structure is immersive and builds the emotional depth needed because it is edited in a way where B.I.G. is talking to us, the viewer. The insight from the videos, B.I.G. ‘s crew, and mother shows us a different human being that we have always been adjunct to seeing, because most products involving the artist have never focused on the meaning and influence behind the music, for both B.I.G. and us as a consumer. It retreads some information that more known knowledge, but it adds more details that makes tracks like “Everyday Struggle” and “Warning” more immersive.

I Got A Story To Tell primary focus on the musical and social influences gives us many great moments and new new information. There beautiful moments where they focus on his youth, further showing the hunger for a musical aspirations deep rooted in his soul. A lot fans know he was a master at his craft, but nobody knew the roots of what influenced him to these new heights. So seeing those moments like him in Jamaica with his uncle or the recording of his first demo, which was him rapping over the instrumental to “Africa” by Toto, is beautiful.

That is the best trait to take out of Biggie: I Got A Story To Tell. It adds a little nuance to the performance of the actor in the 2009 film Notorious, and that film was just alright. But I digress. Behind the story of the man and rapper, there were a lot of anecdotes I wish the film would dive deeper into. B.I.G. always wanted to be the best and found new ways to challenge himself and some of the stories we could have received from featured artists from his albums are never heard. There are great stories behind the conception and creations of the many songs on both Ready To Die and Life After Death, however that is not the story this film wants to tell. It wants to tell a story that lays out a foundation for character in front and behind the microphone.

There are few middling hiccups that mostly come at the end. This is where the documentary feels like it is something else and tries to wrap up his life, including his death in 20 minutes. It loses it intimate approach to only remind us he had a life after this rise to New York fame.

Also, it does not seem to lean in a solid transitional direction, especially when B.I.G. explains some of the duality of death in his eyes. It doesn’t properly give us a good dual perspective that is overwrought, which I know is a bad thing to say about a memorial/death moment. But as impactful as he was as a human and hero in New York City, his music brought a newfound eye on the metro area for Hip-Hop.

I Got A Story To Tell has a lot of heart and clearly has a message/direction it wants to take, but feels rushed at the end as if there wasn’t enough story to tell. There is a lot of beautiful moment that immerses you in his life and the music, even during the times it appear a little hollow.