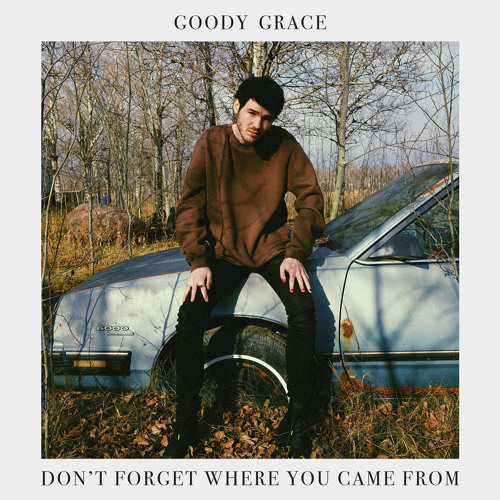 Nothing has gotten these ear’s attention faster, this year, than the new album by alternative artist Goody Grace, Don’t Forget Where You Came From. The music he creates with emo-rock and hip-hop understates the depth the music carries front and back, especially through a nostalgic lens. Unlike the ambient – moody R&B-like Pop trends from his debut, Infinite, his follow up explores slightly more than the thin layers his base style is commonly known for, like basic guitar riffs and loose percussion. Don’t Forget Where You Came From is a plethora of varying shifts in the emo-rock/hip-hop hybrid that amass to an elegant portrayal of emotional angst, that we’ve rarely seen done well in the past.

Don’t Forget Where You Came From has a continuous momentum of crisp Emo-Punk within the few tracks that the overall comfortability gets looser, allowing Goody Grace to fully embrace his musical mind to the fullest. This collection of beautiful rock tracks emblematic metaphors, shows the depth he brings, especially with the orchestration of the features that helps bolster the atmospheric components. Like the final track “21 & Jaded,” which features stunning vocalization from Mr. Hudson and elegant bass work from Anthony Fantano or TheNeedleDrop.

When the comfortability starts to set in, Good expands his styles into varying genres like on “Not Coming Home,” brings the power rock overtures to the fold that further shows the beauty between the songwriting. This continues on the track “North” featuring Juicy J in a rare appearance that shows a more eloquent and calm demeanor from the Memphis rapper. It’s the first real descent into Hip-Hop territory that Goody Grace has always shown strengths in as well.

Goody Grace’s various turns on Don’t Forget Where You Came From feel like tiny breaths of fresh air. The hyper-stylized emo-punk track “Scumbag,” featuring Blink-182 in a fun and angsty pop ballad that has early 00s nuances, like Simple Plan and Good Charlotte. And “Grape Swisher,” brings that essence effervescently with its style reminiscent of the mid-00s shift into dark-glamour skinny jeans era of punk rock.

The features are abundant on the second half of the album, with the strongest coming on the tracks “On Repeat,” featuring Greg Gonzalez of Cigarettes After Sex & Lexi Jayde and “Winter” with Afrobeat-Reggae artist, Burna Boy. “Winter” sees Burna Boy in a subdued way from the overtly glamorous afrobeat and reggae sounds we usually hear from him. It allows his voice to deliver with delicate cadence, complimentary of Goody Grace’s ability to camouflage within any instrumental. The lowly melodies and subtly bombastic percussion makes the hip-hop centric track explode amongst the many.

Of all the features, the only deterrent is the lazy and yawn-inducing track with G-Eazy and Juicy J, who could have been left at the cutting room floor and it would have made a made a solid difference. It’s fortunately the only real big “hiccup.” Not every track carries a sonic complexity and sometimes it can be a slight distraction from the vibrant songwriting, like on “Grape Swisher,” a ballad about relationships and marijuana. The instrumental is slightly tame in comparison to others and it keeps you pondering where the aggressive guitars are.

Don’t Forget You Come From works predominantly well given a lot of the sounds it takes influence from and makes. At times the simplicity in the instrumentals muddles some of the intricacies Goody Grace adds into the fold of 10 of the 11 tracks. However, with its varying sounds to Emo-Rock to Pop-Punk and even Hip-Hop, there is something here for everyone.