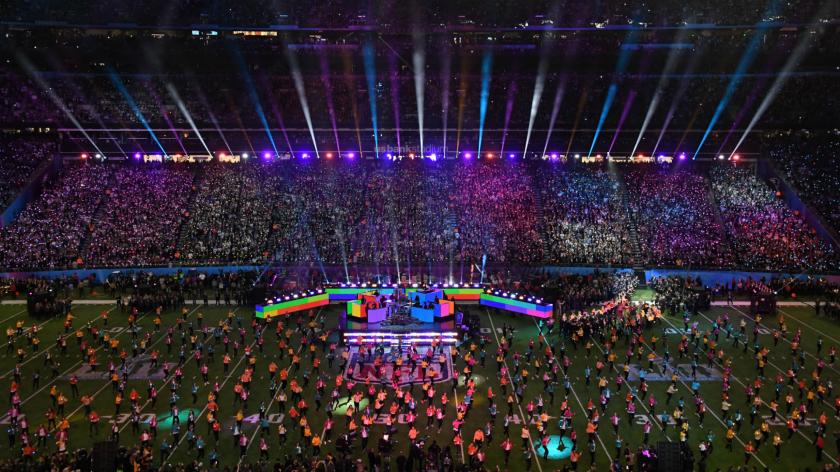 Most sports eclipse through the year, though they are considered for the year in which the season started. So for Football, teams play into January for its regular season. But it works as it allows for momentum to build for the gladiator fights of the modern times in what is the Super Bowl. As we reach the winner for the 2020 season, let us remember in the time honored and more culturally relevant HalfTime Show Performances of the last 20 years. And what better way to do so than by making a list where in the end it is a competition because after viewing hours of performances, I believe I have come up with 5 of the best – overall performances.

But first some honorable mentions.

What can I say that doesn’t involve nostalgia glasses taking mold for this. I wasn’t alive for the height of these songs, but as a child of adult contemporary music Madonna was a definitive name in my own zeitgeist. So when she brought out Cee-Lo Green to perform the last three numbers, but nothing as significant as the harmonizations brought about in “Like A Prayer.”

Beyonce and Bruno Mars Steal the Show from ColdPlay

Most HalfTime shows seen have been predominantly closer to night allowing a bigger spectacle of colors and screens. And as colorful as their concerts have been, this is a different beast to tame. Unfortunately the beast tamed them and the performance was extremely forgettable, except for one moment that saved it. Beyonce and Bruno Mars bring show stopping performances by having contrasting choreography and then implementing that into a B-Boy like battle for the ages.

This highlight speaks more through visuals and than the hooting and applause you’ll receive from me.

This performance benefits from multiple factors like area demographics. But what do you expect when you get two Latin MegaStars in the heart of Miami.

Unlike previous performances this goes over to the 15 mark as both artists bombard us with a plethora of hits that keep the vibes going. Shakira takes a trip backwards through her hits as Jennifer Lopez takes us forward from the beginning. They don’t shy away from the music that predates their upward trending Latin-Electro Pop sound of the past decade. When you see Shakira rocking that guitar solo and backing up Jennifer Lopez on the drums are all great surprises full of glee.

The elegance of the show comes from the choreography since the Latin community has enormous pride in dancing with influential styles deriving from the music of their culture like Salsa, Tango, and Cumbia.

And benefitting all that is special guest appearances from two Latin Superstars in Bad Bunny and J Balvin that bring much needed flair for their younger crowds.

Despite the obvious looking wires holding her as she descends and performs/dances at tremendous heights, or rather tremendous for this guy, Lady GaGa opens her performance with cadence and monstrous momentum as she really gets the party going when “Born This Way” is performed.

The very ARTPOP-like choreography and decoration makes the performance shine and standout. If not for curiosity, but also for the quaff attention to detail as she transitions from tracks that at times contrast each other. It leaves you in awe how she goes from shredding on the keytar to rocking a piano and delivering a beautiful rendition of “Million Reasons.”

Her performance is one of the more formidably memorable ones.

PS: Look at the girl she hugs near the end… your heart strings will be plucked hard.

If there is any knock against this performance is the audio levels or the possible inflection of voice that Kelly Rowland and Michelle Williams have as Beyonce brings them to perform two hits from the Destiny’s Child era.

Almost everything about this performance is perfect, from the choreography to Beyonce’s hypnotic and powerful voice. But as it is with multiple trends in these HalfTime shows is the inclusion of a ballad-like number to unify the audience before the beefy and burly men tackle each other for glory and rings.

The Destiny’s Child performances play off nostalgia with modesty and ferocity. It definitely got all the boys hollering… sorry Kelis.

What makes this iconic? It could be that the set list was primarily 80s era Prince where the fiery funkadelic guitar took the radio waves by storm. Or it could be that he implemented that with some sick covers all the while rain downpour on him and the band throughout the performance. It was electrifying to say the least. He commanded a crowd and did it on his own terms by keeping as close to his aesthetic as possible.

He opens the performance to the momentum builder “Let’s Go Crazy,” and closes with the beautiful ballad “Purple Rain.” But as the performance goes from point a to point b there has to be something for them to fill in between. And Prince definitely knew how to do it. He weaved these amazing melodies of his songs with others to create smooth and beautiful transitions like going from “Baby I’m A Star” to “Proud Mary.”

Man, I could gush and gush about this for days, but it is best if you witness it for yourself.

I was only seven years old when the towers fell on September 11th. I didn’t understand then, but understanding now shows how uproarious and unifying U2’s performance was in relation to the time.

Their performance came at a peak, at both the careers of U2 and the NFLs attempt to keep themes relevant. U2 was not particularly the type of showstoppers we have today, but at the time the trend in music made them that. It was unconventional to say the least and they took full advantage of the opportunity.

It opens to a mind altering performance of “Beautiful Day” where reality isn’t within feet or inches in front of us and we can just escape. And it ends with a powerful rendition of their 1987 hit, “Where The Streets Have No Name,” on a heart shaped stage all the while a list of all the people we lost on the tragic event of 9/11 scrolls. In a way it made us feel pride and triumphant as we are able to continue to see the light despite tragic loss. Sports as a whole allowed us to see that and U2 added to that.