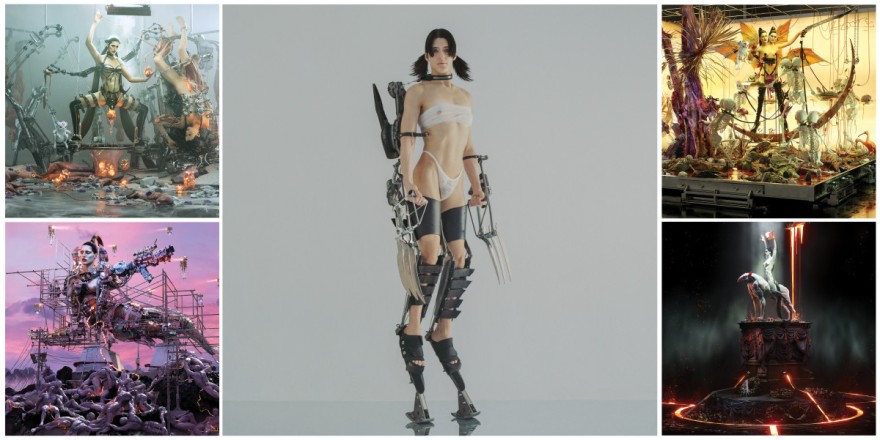 Over the last few days, the intake of new music from Arca was at an all-time high – it was one helluva roller coaster ride. There were highs and exponential lows, but within the confines of these monstrous projects, there is an artist that’s ready to bloom. After a lackluster return-to-form approach in the third installment of her KiCk series, Arca breaks down musical layers as she strips the production into intimate pieces of somber electronic music in the last two projects of the series – within the music, we hear elements of Avant-classical, witch-house, ambient, and others that align in the spectrum. And in continuation with the varying themes throughout the series, both projects see themselves shifting into a slower progression as if the roller coaster is about to end its course.

KiCk iiii begins to descend into sounds that aren’t hyper-active or filtering through loud noise-relative overtones that shift it to a tonal consistency. However, it is more apparent in the final album of the KiCk series – iiiii, which has tonal consistency. But shifting back to the former, it brings forth a melancholic vibe boasting trippy sounds with its witch-house and ambient-wave overtones that splits the impact each project delivers. It takes us on a journey of transformation, acceptance, and freedom as we express ourselves through this whirlwind experience. Like the second album, these two albums carry themselves firmly, on two feet, as Arca creates these new sounds that personify a new chapter.

Through illustrious use of high-pitch, low-tempo wave sounds, Arca finds a way to make them come across as more luminous and hard-hitting, despite turning into a project that occasionally camouflages into a small void of forgetfulness. Like ii and iii, there are moments you find yourself returning – after a few tracks – since what comes in and out after “Witch” is a myriad of tracks that feel like it’s missing the spark you got from listening to the first few tracks. It has an effervescent array of instrumental layering, primarily using varying levels of synths, whether elevated or elongated – this creates coalescing sounds, particularly from the electronic strings and pianos that underline the synths. But as it goes along, issues derive from Arca letting her musical fluidity control the second half of KiCk iiii.

Unfortunately, the only drawback from the expressive performances and production is that some tend to fall flat with meaning, like “Alien Inside,” featuring Shirley Manson, lead-vocalist of Garbage. The more it sits with you, the more it creates arguments in your head about whether or not you like the intimate and tempered sounds. “Alien Inside” is focused more on the message that the production appears to get lost as it tries to find the synergy. And like “Alien Inside,” “Witch” feels like they lack a proper identity reflecting the intimacy of the album. And as the latter stands firm, the former comes across abrasive, comparatively, despite meaning flowing with synergy. It isn’t like KiCk iiiii, as it stays direct on a path that never takes a detour, and instead, it adds depth slowly.

Most of the fourth KiCk is keen on making the synths a central focus as Arca delves into new sounds, akin to the second and the fifth volume. Like I’ve mentioned in my review of the third volume, Arca took a step back – she was keen on recreating what worked in the first two that lacked comprehension of its identity. Though she pivots to working with new sounds – and more frequently – it shows her having an identity – on a path over 80% of the time. That 80% may be hyperbolic, as it speaks internally to the tracks and how they keep themselves aligned amongst the tracklist. KiCk iiiii is the most consistent, compared to the others, but it may not be one’s cup of tea. As I’ve mentioned prior, it transitions into quietness, and that quietness lets the project explore depths that seep into your core, as the classical strings create monstrous and everlasting impressions in your mind.

KiCk iiiii is timid and yet, along with the second, delivers that memorable impact that has me wanting to return. The delicate nature of the classical arrangements as they become the focal point – think songs “Estrogen” and “Ether” – they have a twinkle, a desire to extend their foundation. It shows in the transitions, like when the glitchy-ambient-pragmatic “Músculos” goes into “La Infinita,” as a way to temper and express duality. But that’s what has been part of the themes Arca inflects with her songwriting. She is free, and she is wild. She feels and senses the absence of love, as well as lapses of loneliness. And Arca can inflect with understanding levels of connectivity, where even the mildest song where she tells us we’re diamonds speaks louder since the production mirrors the honesty. It also speaks to the way she intertwines the separate styles in one song – in terms of duality. “Firestarter,” for example, bridges the fine line of classical and ambient-electronica, as the effects and tempos make their presence known. After an electronic-focused 2/3s, Arca expresses the synergy that comes from the transitions – it’s the case with the tracks that close iiiii.

Arca’s KiCk series has been a whirlwind experience, containing different variations of music where Arca steps into some unknown territories. But the final two sees Arca flourishing at the utmost top quality. It left an impact than the third album, and stays lodged in my mind as this larger-than-life project that works on its own and as a collective 5-Part binge.