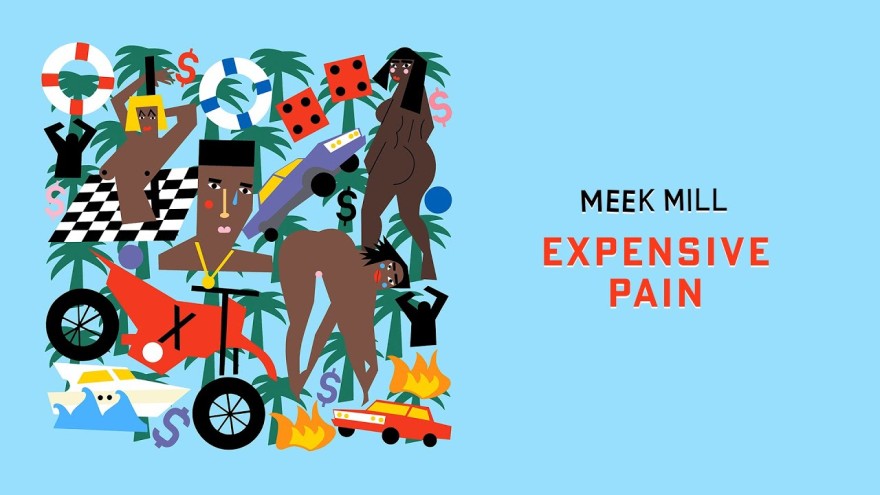 It’s hard to openly admit that Meek Mill, despite potent and unique verses, at times, has been somewhat of a rapper that has kept face with consistency in his music, even when his flows pull back too much. Amidst some decently drawn Picassos in past albums, Meek Mill excels when the music calls for him to turn up the crowd — his bombastic and obnoxiously loud flows, attributes to these songs’ success. It falters when Meek tries to dig within his heart because the loudness can always get toned down. It isn’t a knock toward Meek, as his writing stays up to par with his better work, but it’s hard to consume when someone is yelling it in your ear. That said, Meek’s new album, Expensive Pain, continues that consistency where it takes unnecessary detours, albeit few songs that stand out as monstrous bangers.

When it comes to Meek Mill and his flows, he ironically states in the title song, they have me switching flows, but he doesn’t always show it. Sometimes, he switches tempos and vocal-chord progression as the verses intensify, but that’s about it. It’s what separates songs like “Hot” and “Me (FWM)” from “Ride For You” and “Love Train.” But what’s hard for me to conceive is the notion that Meek can subdue himself and come across as more loverly. However, the songs that evoke a party and gangster atmosphere excel as Meek doesn’t create a faux persona-non-grata for himself and truly embodies who he is.

“Hot” and “Me (FWM)” are positioned to exceed expectations, and more so the former as Moneybagg Yo has had his fair share of highs and lows throughout the years, including the more recent, 2021’s A Gangster’s Pain. Moneybagg Yo is in prime form on “Hot,” as he delivers, along with Meek, these intricate bars that flex success in wealth (and women, I guess). Gleaning excess through their life can be boring for fans who feel the trite redundancies come about, but if they can arrange something different, it’s as fresh as the first time they went behind the microphone for their first release of a song of this nature. Buoyed by hard-hitting percussion and that weird little flute, “Hot” stands alongside “Me (FWM)” as bombastic standouts.

“Hot” takes cues from “Me (FWM),” weaving the nuances of modern hip-hop without reaching on the building blocks on top of the percussion, as well the content — different tone. “Me (FWM)” sees Meek Mill and ASAP Ferg flexing their status and worth as rappers, using their relation to females/groupies as a way to express that worth, while using violent-like verbiage to solidify their street credit. Unfortunately, as vicarious as Meek and Ferg are — especially, Meek — Expensive Pain is partially a convoluted selection of songs that can’t keep itself honest.

There are moments in which Meek Mill lets down his wall and delivers raps with any form of emotional depth; unfortunately, it muddles in a swamp of hypocritical flex raps that I genuinely like. But these songs that focus on the so fresh, so clean nature of celebrity — for me, slowly dissuades any notion they aren’t far from the street curbs. I’m left wondering if he was trying to meet halfway, as the supposed concept of the album doesn’t ring with cohesion. However, at times, his wall-breaking works. But it is primarily with songs that deal less with the troubles that come from having wealth and success, as opposed to people in his past or events that changed him. “Northside Southside” and “Angels (RIP Lil Snupe)” bring the best out of him in these overly emotional songs.

“Northside Southside” features UK rapper Giggs — both rappers rap about their roots, external connections, and the kind of comradery/brethren amongst their gang. Within the verses, they look at various aspects that lead them in this direction that contrasts past and present, adding vanity to their character. The production is a little least-to-be-desired, with a standard progression of percussion and minimalist details in the overtures. Fortunately, Meek and Giggs are enough to keep you flowing through the song, despite succumbing to another Meek problem, the chorus. Sometimes it’s effective, like on “Ride For You” with Kehlani and “Angels (RIP Lil Snupe).

“Angels (RIP Lil Snupe)” does well with the chorus, keeping it simple and direct as Meek Mill spills his emotions to us about the loss of his namesake protegé. Lil Snupe, unfortunately, passed away in 2013 as a victim of gang violence, and it has been looming over Meek since then. Every time Meek accomplishes something, he reflects on Snupe as an angel on his shoulder. His success is grand, but it doesn’t feel the same as Snupe isn’t there to bask with him. And from listening to Lil Snupe, he had potential and could have been one of the rare ones. It adds brevity to Meek’s disillusions in his current stasis as a rapper

Unlike “Angels (Lil Snupe),” “Ride For You,” and others of this kind falter because Meek Mill never keeps it interesting when speaking on love. He delivers poorly because of his enigmatic energy that can’t keep up with the tone. Kehlani’s performance on the song is as expected — it’s enough to carry itself with solid production from Savas Oguz and Austin Powerz. When Meek Mill performs the chorus, they are seldom good, and when there is a featured singer, it’s a simple highlight.

Expensive Pain is a little bloated and lost, and within the mess are plenty of solid tracks with repeat value. Unfortunately, it continues to show Meek Mill’s inconsistencies full-frontal without much reward. I didn’t hate Expensive Pain, nor can I say it this massive-bombastic record that sees Meek attacking it at full force. I recommend touching the hyphy songs more so than ones that pit his soul with another female as he turns on the snooze button from there.