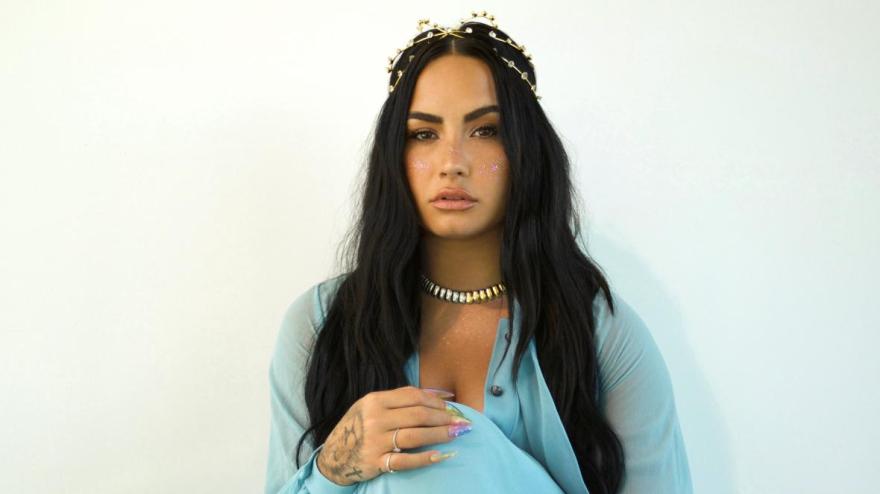 When an artist digs into the roots of their person and lets their demons dance their way out through the music they create, that they deliver a mix of various sounds that all have one dynamic – thematic cohesion from start to finish. Demi Lovato is no stranger to the darkness and she is no stranger to the glamorous pop banger. As illustrious as her career was, her music always felt stuck in the bleachers, opposed to court side. Her new album, Dancing With the Devil… The Art Of Starting Over, upgrades from the bleachers and we finally see Demi delivering a very personal album that takes the direct approach in telling her story and incorporating themes of loneliness, substance abuse, and love within them.

Dancing With The Devil opens with an odd construct of songs that feel like many forewords before the note from the author hits you (in the “Intro” titled track) and then you can finally start getting to the meat of the book. But these songs vary in two distinct stylistic core we will get more of later on in the album. There are the moody piano ballads, echoing with Demi’s vocals in the underwhelming “Anyone,” and the powerful vocal performance on “ICU,” and the electro-dance-punk “Dancing With The Devil.” It delivers a backdrop to the effervescent array of songs to follow that carry a lot of emotional and spiritual weight, contextually.

The one aspect of Demi Lovato that always shined in, was her ear for production. Since her ascension to Hot 100 in the earlier half of the 2010s, with songs like “Give Your Heart A Break,” and “Cool For Summer.” So it comes to no surprise that a lot of the production on Dancing With The Devil is exceptionally great; from a mixture of glittery pop-punk dance ballads, acoustic pop-rock, and acoustic bedroom pop, Demi digs deeper into her roots. These different sonic structures don’t always mirror standard traits of direct genres, it breaks it into pieces and delivers it in varying ways, further showing the kind of artistic singer that once felt trapped in trendy pop.

Demi Lovato’s creative direction and inner musical ferocity shows as she finally lets loose and delivers the kind of music she wants to make. However, there are times where the songwriting can be too direct and without underlying subtleties to back the themes and stories. When it switches up by evoking a concept that focuses on dissecting her mental break from the negatives, even taking a mini jab at the mouse himself. You can hear it within the beautifully infectious “Melon Cake,” that has a groovy percussion underlying these simple and well mixed pop overtones, like the bass lines and tempo. It’s Demi grabbing the sounds that shines with her style and vocal flexibilities, considering she isn’t bellowing like it was echoing from Mt. Everest.

An interesting inclusion is a cover of the Tears for Fears single, “Mad World.” Hers, however, takes more influence from the cover by composer Michael Andrews and singer Gary Jules, which was made for the film, Donnie Darko. She brings with her a lot the slow-tempo melancholic vocal pitches, which works to her strengths, specifically the broken down nature of the instrumental that is more aligned with the version from Donnie Darko.

Demi Lovato brings with her different artists that bring a different touch, but more often than not they don’t always hit. The Ariana Grande feature feels too on the nose and Demi feels shoe-horned in her own song that feels a little more like a lesser Grande-like pop track. Saweetie delivers a verse later on in the track “My Girlfriends are Boyfriends,” which is like the production and context of the song – aka female empowerment. The electro-pop track overdoes the percussion to the point where it just stays on a boring loop. It happens intermittently throughout the album, specifically where the songs start to get too into the warp space of standard pop, like on “The Kind of Lover I Am.” But fortunately there is one amazing duet that comes from the varying features, and that is on the track “What Other People Say,” with UK singer Sam Fischer. It is a unique take at a gospel like orchestration that has great melodies from the two.

Despite some varying hiccups, Demi Lovato’s Dancing With The Devil… The Art of Starting Over delivers true to her vision. It may come off as niche, since her varying pop sounds don’t correlate with standard sensitivities, but there is enough for the many.